A whirlwind week of Beers, Bikes, and a little VooDoo

Last weekend Miranda and I flew to Portland for this year's Park Tool Summit. We flew in a couple days early to take in some of the sights. Portlanders do not mess around. Maple doughnuts come with bacon on top! What I thought would be a standard cup of coffee, ended up being some of the best coffee I have ever had. And Miranda had Pho soup she loved so much that she went back the next day for more. 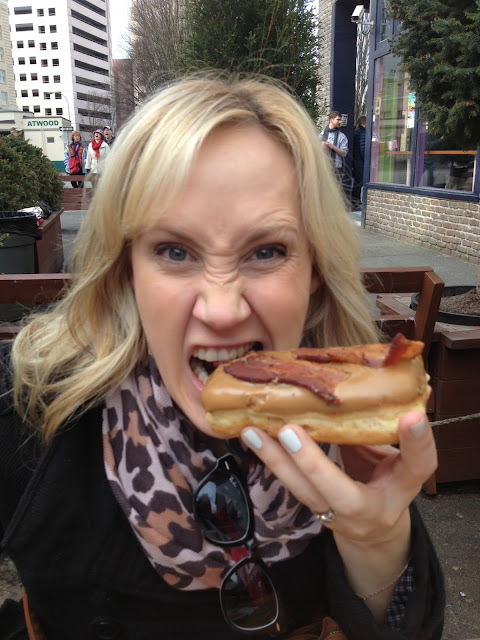 Here she is at VooDoo Doughnuts! 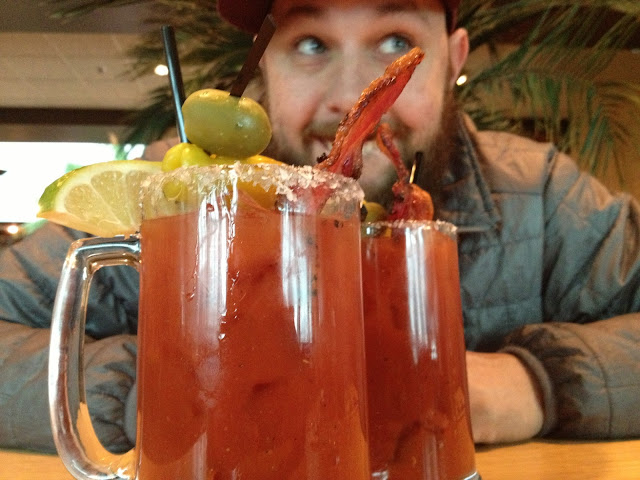 Everything is better with bacon. 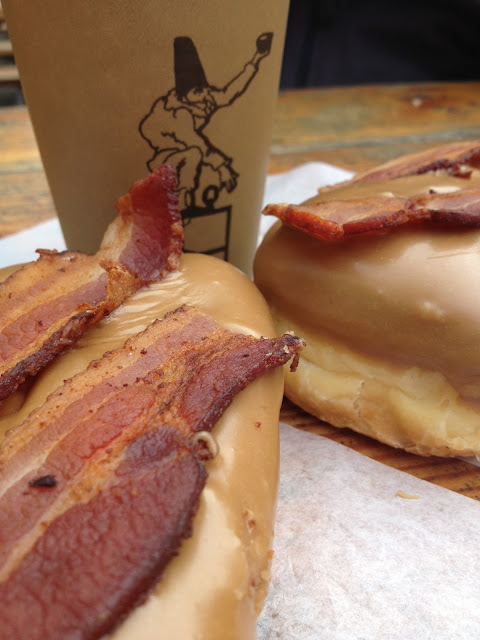 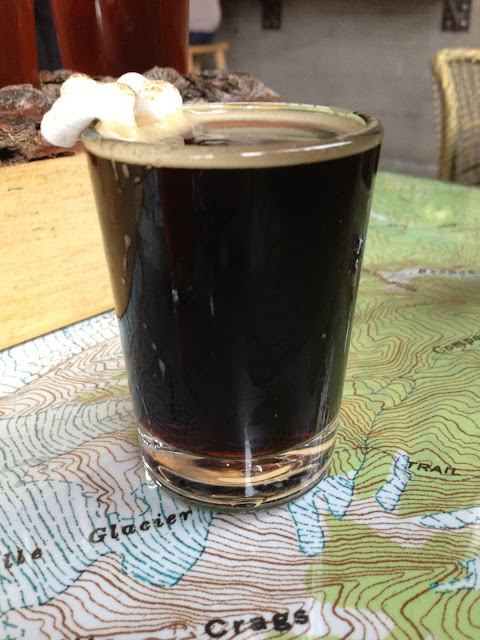 After two days of exploring, it was time to get down to business. I woke up early Monday to check in and get my schedule. First was Park Tools with a comprehensive class on proper installation of tubular tires and a new way of charting spoke tension. Then we had a short brake and it was off to Fox to talk about the new CTD platform. I was super excited for this class, because of my work with Nationwide Veloworks. Everyone on the team is on a CTD and I was able to find the answer to some of our recent problems. I stayed after class to get a few more tips and almost missed lunch. After a quick bite, I rushed to Mavic where we discussed the new braking surface and how to service their new freehub. I also learned the best truing techniques for their carbon cross spoke wheels. After 9 hours in the classroom, I ran up stairs to grab Miranda and we were on our way to the party. Right away we ran into my buddy Federico from the Slippery Pig Bike Shop in Phoenix, AZ. Talking to mechanics from all over the world and drinking free beer make for a great party. It's amazing to hear the different issues that come up for mechanics all over the world, even though we basically do the same job. The vendors at the event were giving away tons of cool swag. I was lucky enough to win two Crane Creek 110 headsets! 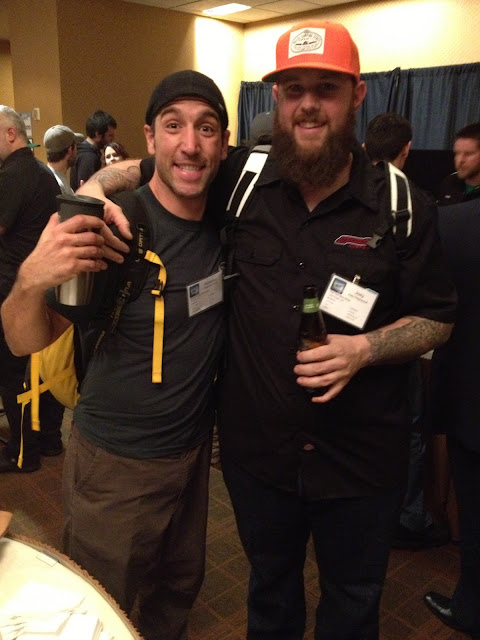 Day two started off with Shimano's new 9000 series Dura Ace. There were so many changes to the system, I was stoked about all the improvements. We must have spent the first hour and a half on the front derailer set up alone. Next on the list was SRAM where we learned about the new Red Groupo. We also went over a basic rebuild of a Rock Shox Reeba. I was a little disappointed that they didn't talk about the new 1/11 since that was the reason I signed up for the class in the first place. After SRAM I got a little food,  then finished up the Summit with Crane Creek. We learned about rebuilding a Double Barrel shock and went over a new system of proper head set selection. It is truly impressive how many head set combinations are out there these days. The next morning, Miranda and I got up at 3:00am to fly home. 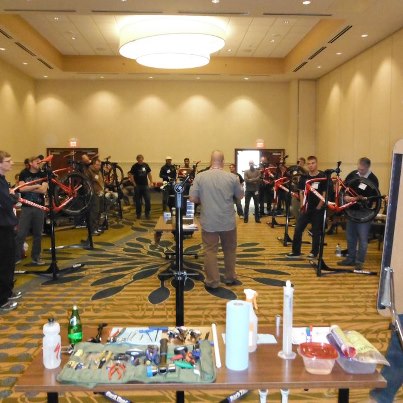 As soon as we landed I was on my way to work. The first thing I saw when I walked through the door was one of the Nationwide/Veloworx bikes having an issue with it's Fox CTD. It felt great to know exactly how to fix it and be able show off my new skills. I spent the afternoon prepping a few bikes for the upcoming 24hrs in the Old Pueblo. I had two days to sleep in my own bed and it was off to the Old Pueblo! 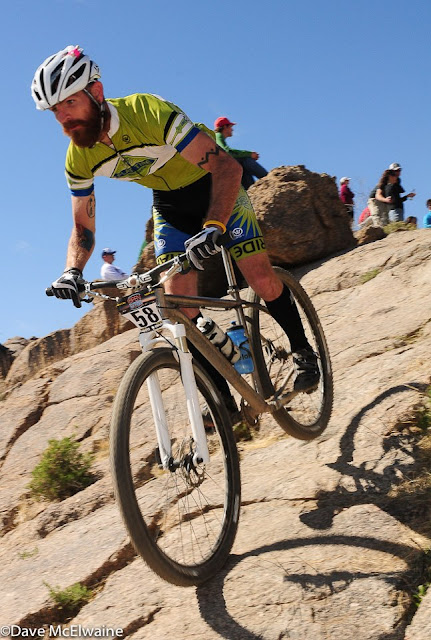 For this race I wasn't working with Nationwide. I was there to help my good friend and boss, Kaolin Cummens, with his attempt at Solo Single Speed. And another good friend of mine, Kevin Grunion, who was going for Two Man. 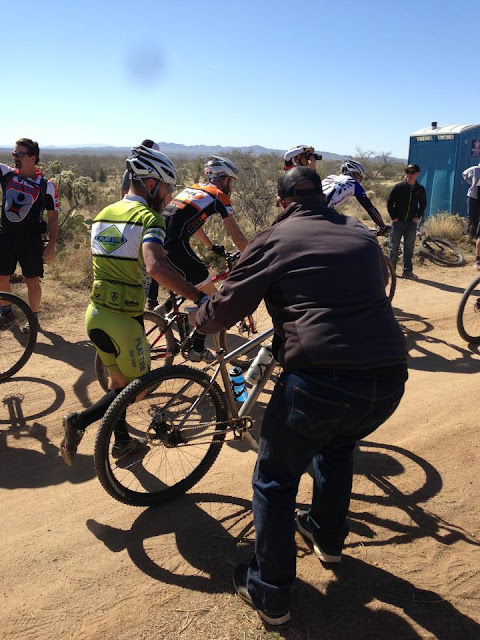 The race started off without a hitch. Kaolin ran hard and the bike hand-off was perfect. Kaolin was in the lead for the first two laps. We did a quick gear change on the third lap, switching to one tooth easier in an effort to accommodate the strong head wind. We knew we had a problem on the forth lap when Kaolin came in 10 minutes late. Kevin came through the pits on his lap and told us he saw Kaolin on course messing with his seat. I quickly got our spare post and seat ready for when he came in. We waited and waited and finally he rolled through. Two weeks prior Kaolin had a bad crash in the Single Speed AZ Race where he hyper-extended his ankle. After extensive rehab he was cleared to race again, but the injury still affected him enough to take him out of the race. Once we decided it would be best for Kaolin not to go on, all of my efforts were focused on Kevin and his teammate. Going into the night, Kevin's team was in 20th place. But they rode hard and by morning they were in 12th. They managed a very solid finish in 10th place!  Here's Kevin on his last lap. 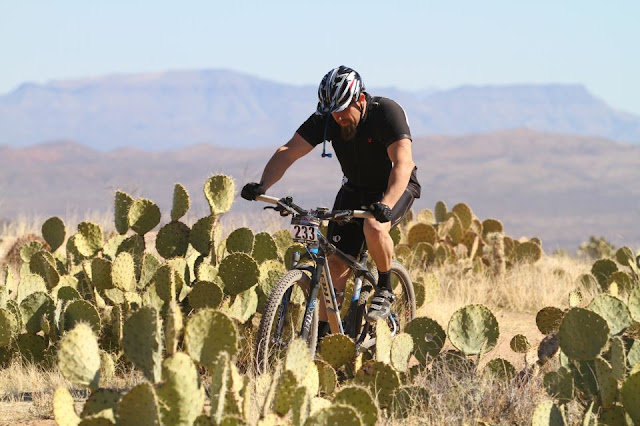